It’s easy to get excited about the unique space in which the subject of today’s special report operates. GGToor (‘Good Game Tour’) is an eSports Gaming company that conducts online video gaming tournaments for real world cash and prizes through its wholly-owned subsidiary, Shadow Gaming, Inc.

Much like young people in years past used to dream of becoming star athletes, the youth of today often aspire to embark upon pay-for-play gaming careers. GTOR has positioned itself to take advantage of an ever-growing cultural phenomenon that is not going away, but instead, will continually expanding to new heights.

According to market research firm Mordor Intelligence, the global gaming industry in 2021 was valued at over $170 Billion. The expectation is that it will reach a market valuation of well over $300 Billion in the next five years, based on a Compound Annual Growth Rate (CAGR) of 9.64% over the period between now and 2027.

We believe GTOR‘s unique operation offers gamers a way to enjoy their favorite video game titles with an additional layer of engagement and fun. Their regularly occurring tournaments in some of today’s most popular game titles are an incredible draw to the PC, console, and mobile gaming communities, which is estimated to include more than 200 million people in the United States alone. The screenshot below shows just a few of the upcoming tourneys and game titles on its schedule.

In addition to the standalone contests, GTOR has plans to form its own eSports gaming league, which will increase the company’s visibility to gamers, which are the fuel upon which it runs. Many of the currently operating gaming leagues are sponsored by the major game developers like Blizzard/Activision and more, and are thus so exclusive that the average gamer doesn’t have a chance to become meaningfully involved. GTOR‘s proposed league would have the chance to be much more inclusive and draw a lot of grassroots interest with up-and-coming participants.

But gamers don’t have to wait for that day, because the company’s cash prize tournaments are open to all who are interested. You don’t just take our word for it, you can actually VISIT THIS PAGE and register to join the GG Toor and get in on the gaming action!

Another unique aspect of GTOR that sets it apart from a great number of OTC-traded companies are the weekly shareholder updates that you can find here in the company’s news feed on OTC Markets. It is exceedingly rare for a company to be this transparent and committed to keeping its shareholders informed. GTOR is a diamond in the rough in that regard, and we are very excited about its potential for growing its footprint in the eSports Gaming Market.

We’re also coming across GTOR at an opportune moment on the chart. The stock is coming off of a recent relative bottom in the low-.02 range, and the RSI is beginning to approach oversold territory. As you can see on the snapshot below, the stock had been under consolidation for most of February, and a return to levels seen in the waning months of 2021 would spell a considerable increase over the current PPS.

With only slightly over 200M shares outstanding and less than 90M in the float at last count (11/30/21) GTOR also has the kind of tight share structure that we find very attractive. 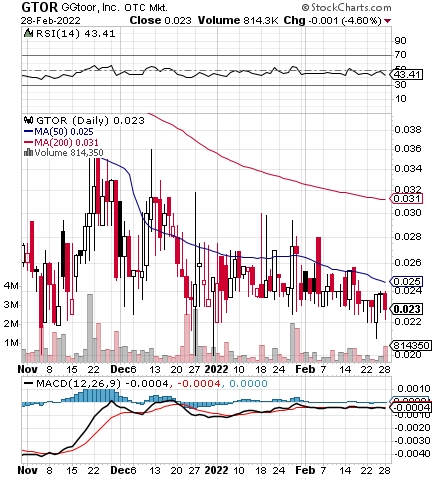